Discovering the secrets of Balinese cuisine is a fascinating journey, and one that at times has an almost fairytale feel to it. Take for example the story of the bumbu genep. This mixture of 13 spices is the basis of nearly every Balinese dish.

It is believed to have been part of Balinese history for more than 2,000 years

Also, the bumbu was supposed to have been a present from the gods to human beings given through the Pandawa, the five children of King Pandu.

The Balinese believe in the importance of balancing every aspect of their lives, and that includes their culinary culture. Bumbu genep consists of four main spices which represent the balance of four gods, as well as four main directions. Galangal symbolises The Brahma and the south, turmeric The Mahadewa and the west, ginger The Vishnu and the north, and kencur The Iswara and the east.

In traditional Balinese kitchens, these four ingredients are measured with the length of fingers; galangal by the middle finger, turmeric the index finger, Ginger the ring finger, and kencur the pinky. Eight more spices are combined with these main ones, including shallots, garlic, shrimp paste, chilli and salt. The bumbu genep is used to season sate lilit, lawar and many other dishes, including the succulent betutu, one of the most popular Balinese ceremonial dishes and made from chicken or duck. 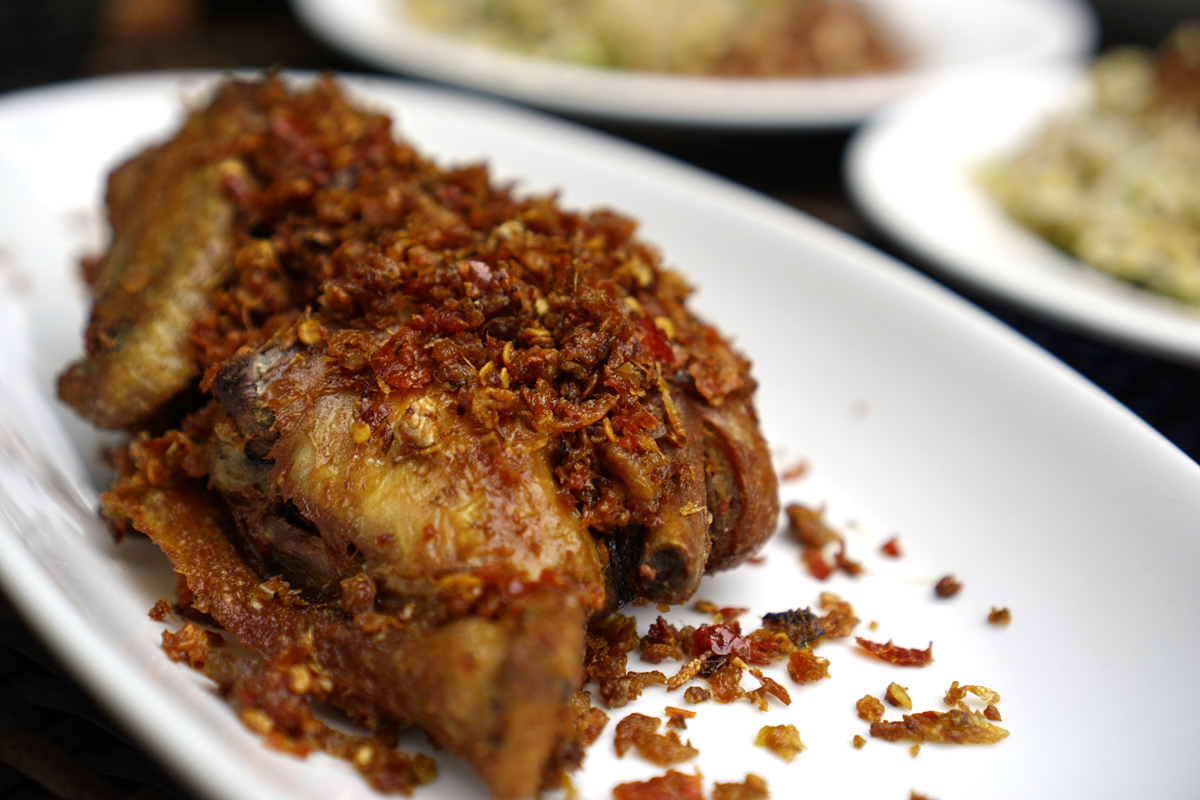 There are a few different versions of betutu found throughout the island. In Ubud, the birds are stuffed with cassava leaves encasing the full complement of the bumbu genep, then wrapped in banana leaves and placed inside a husk, coconut or rice, then roasted slowly for up to twelve hours.

This double wrapping makes the flesh of the cooked bird tender and succulent. The roasting permeates the spices to make an insanely satisfying, almost barbeque like flavour.

Other regions, such as Gilimanuk, Bangli and Klungkung, cook their betutu in different ways. Fortunately, to try any of them you don’t have to wait to be invited to a festival, since there are speciality warung making the most out of the everyday and turning any meal into a festive occasion.

The late Mrs. Tempeh, originally from Gianyar, began this venture with her husband, a native of Bangli in 1978, at Gilimanuk bus station. Their version is still the most popular, and involves boiling the bird for an hour in the bumbu genep spices and serving it soup-style with plecing, the green leafy vegetable mixed with spicy sambal. Also offered is fried betutu, spicy and tender inside but crispy outside.

The betutu has been so successful that many of the employees of the warung have set themselves up as competitors, right at the bus station! It has become impossible to work out which is the original, as the ex-workers have not only copied the recipes but also taken the name of the warung with them. Today you will find almost a dozen “original” Men Tempeh traders.

The business is now run by Mrs. Tempeh’s son, who has decided to open a branch in Denpasar at Krisna Kuliner food mall. Here Ketut Nuryasta, a childhood friend, closely guards the secret recipe as he prepares the original betutu over an authentic traditional fireplace serving up a superbly spicy Men Tempeh Gilimanuk-style dish. 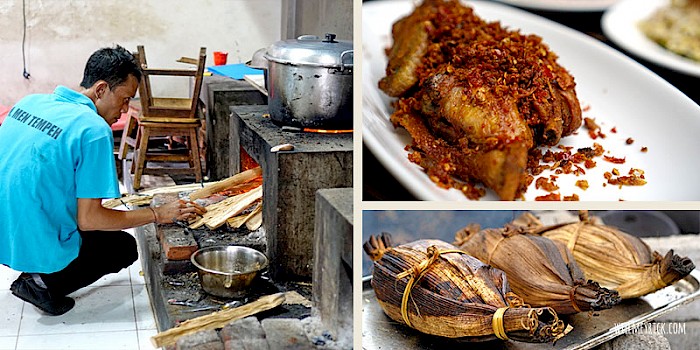 One of the former Men Tempeh workers did in fact take an individual approach. When Oka Suci branched out he also rebranded.

First he switched the recipe from being super-spicy to a little bit milder, allowing more people to experience the taste. Second, he added humour. He turned his comedian friend Dadab into a Ronald McDonald-like character, making Dadab’s face the logo on the yellow signboards that proudly advertise Betutu Gilimanuk across the island. While Men Tempeh is famous among locals, Oka’s Betutu Gilimanuk gets the biggest slice of the tourist market. 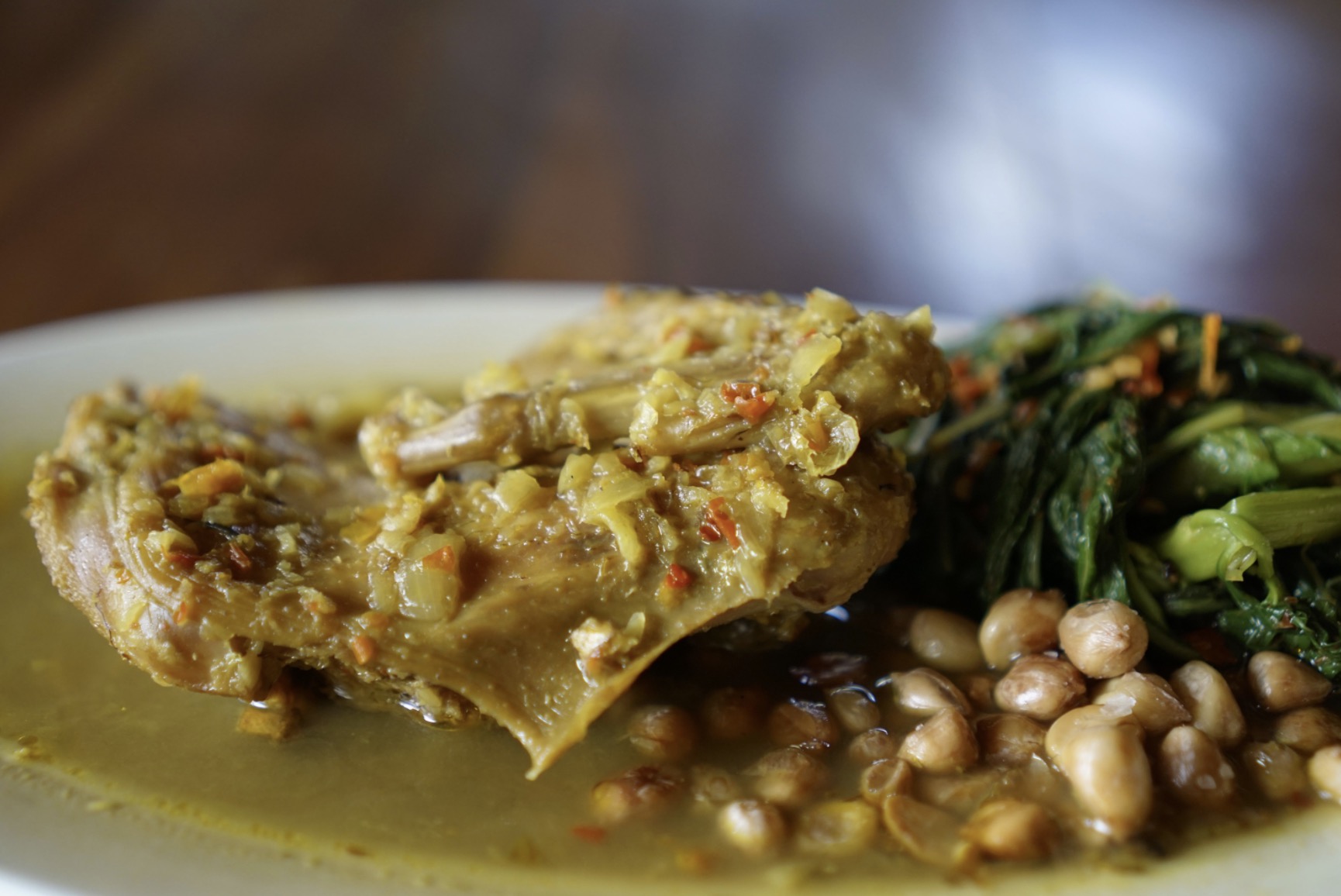 Here you will find a very good betutu nicely presented with raw vegetable and sliced tomato. Cleverly, Ibu Nia serves only the chicken, and has created a niche market for her ayam betutu on account of not serving duck. She is gaining ground in a competitive market since just around the corner from her place is one of the popular Betutu Gilimanuk’s. 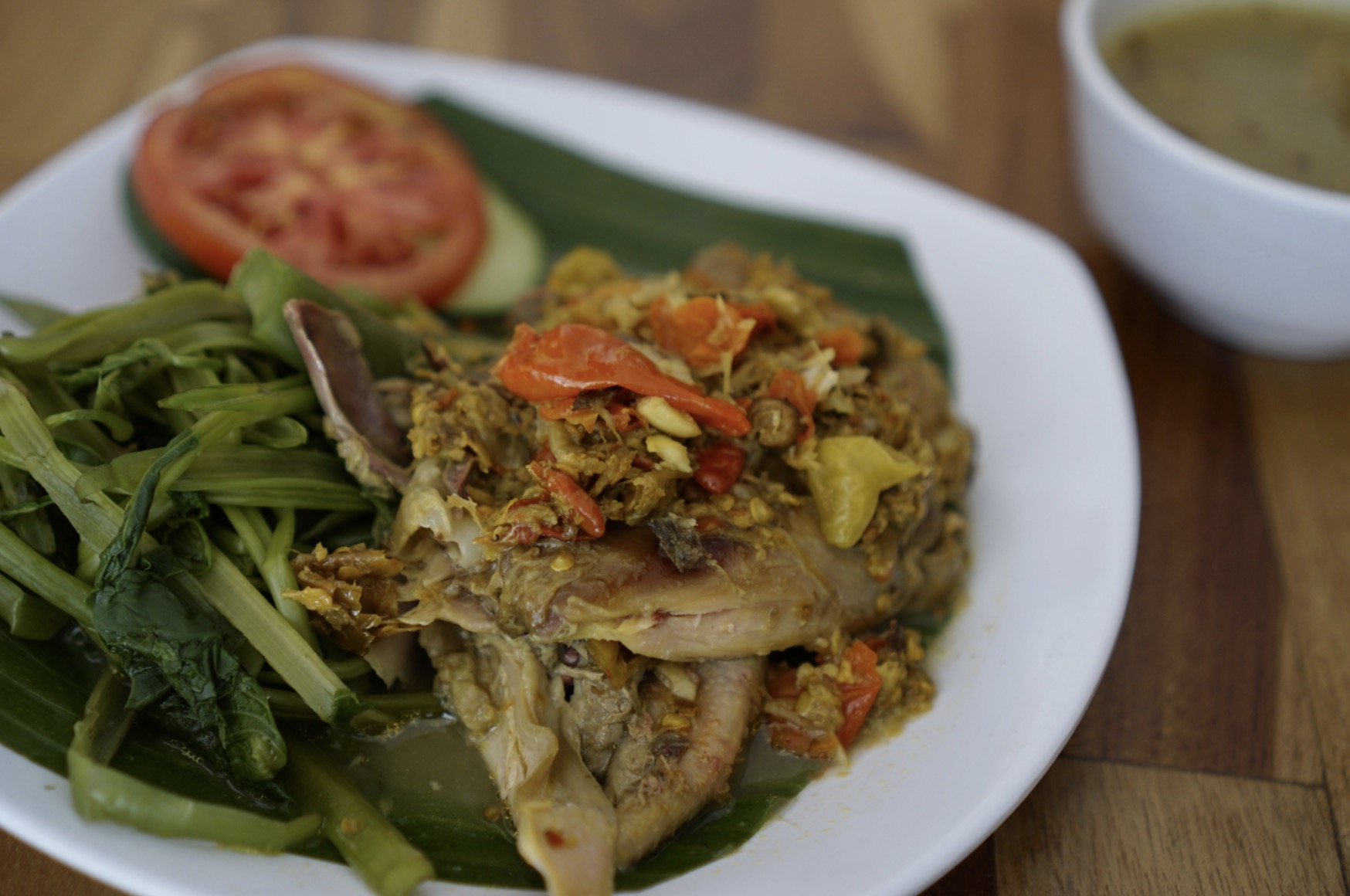 Warung Liku – which means meandering like a lazy river – on Jalan Nakula sells its betutu as part of a whole set meal, so you absolutely have to be meandering to enjoy the full benefits. The betutu here is grilled first then boiled in the spices of a bumbu gede. The warung is always full at lunch time. 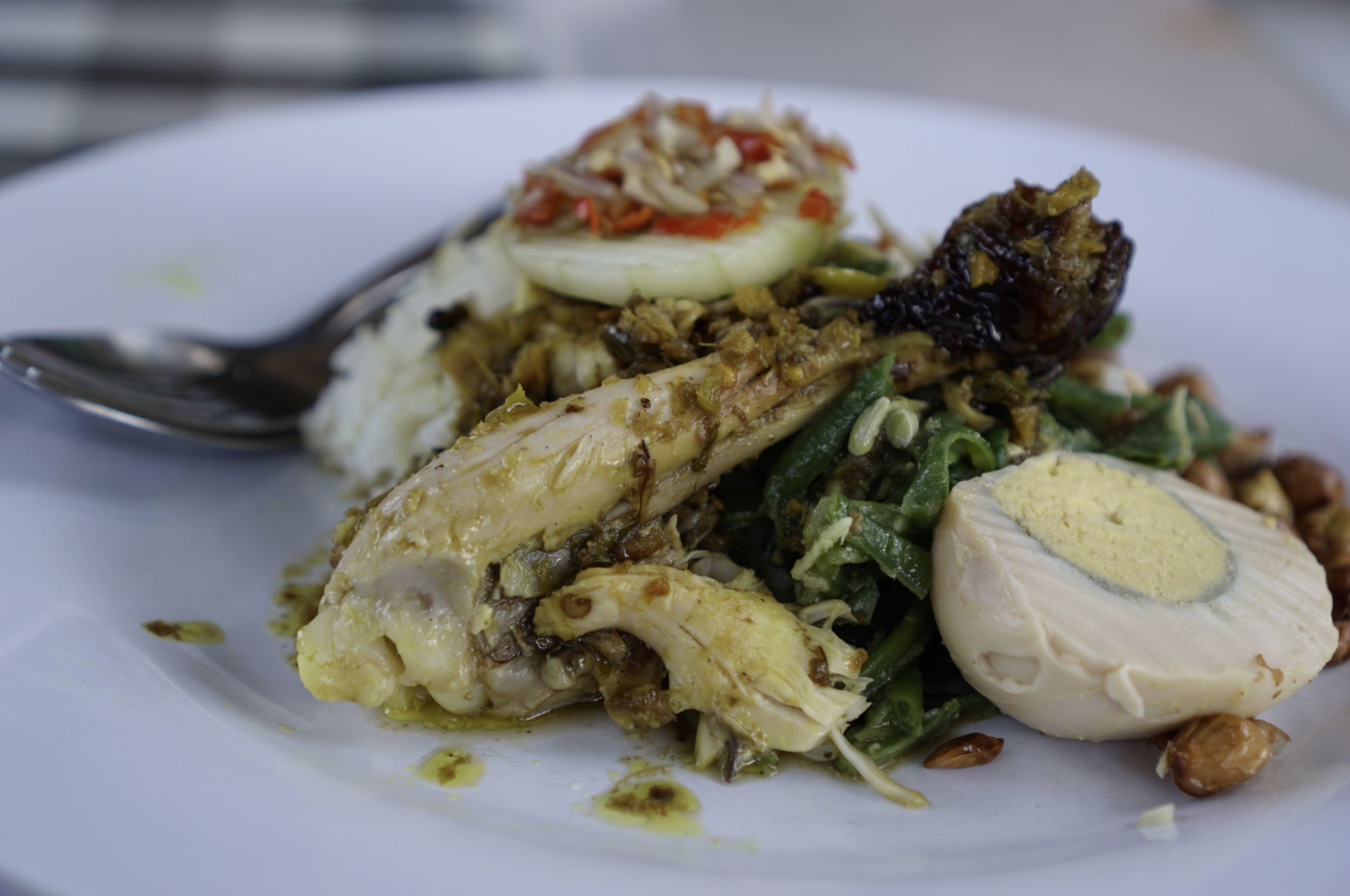 At Hujan Locale we adopted ubud-style betutu, wrapped in palm spathe and cooked in a rice husk for up to five hours.

I like this for the toothsome resistance of the roasted skin that is followed immediately by the yielding of tender aromatic flesh.

Life is worth celebrating, and the betutu served at Hujan allows you to do just that. With a chilled glass of wine and a Balinese temple view, you can unwind and enjoy the traditional flavours of Bali. 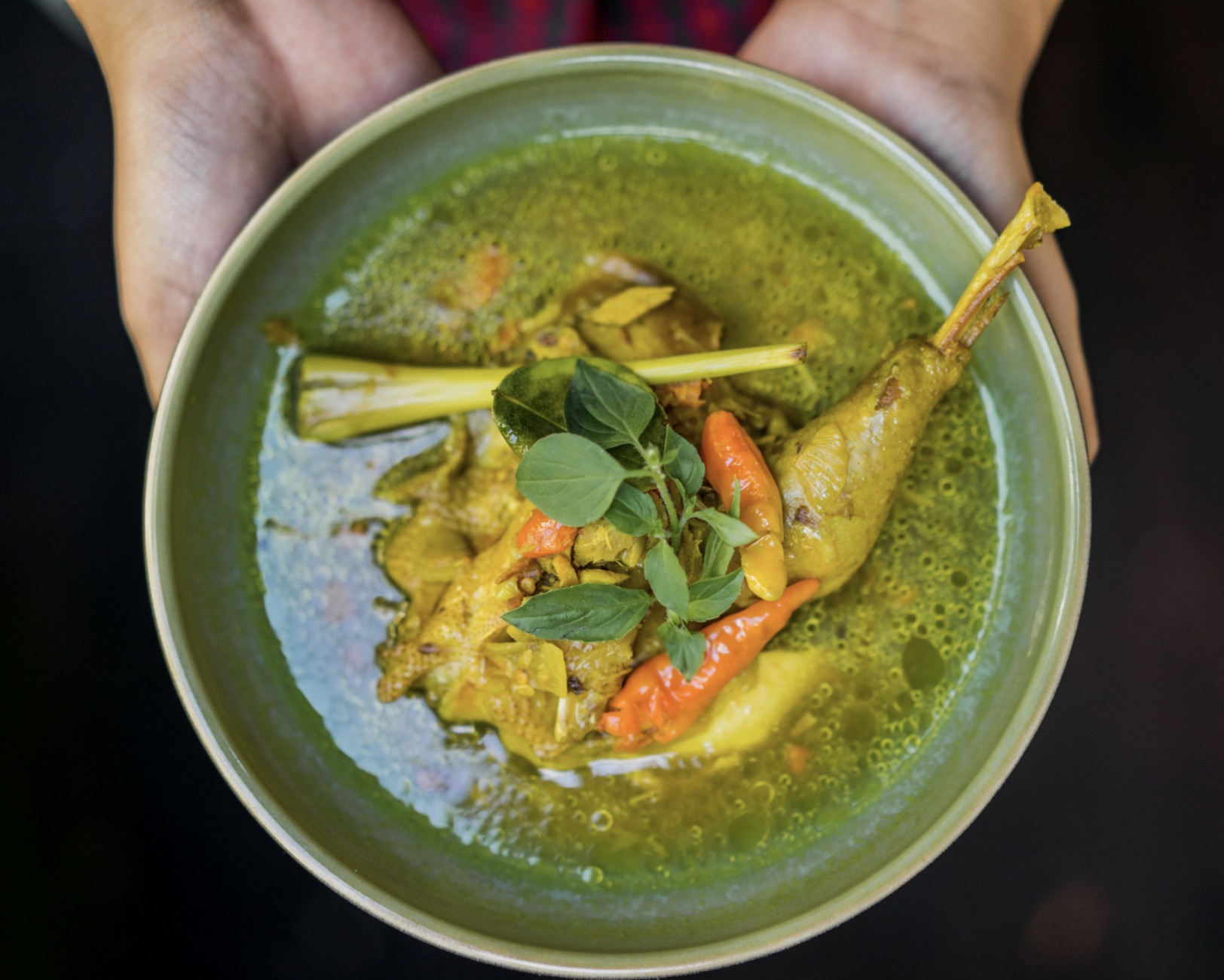